It was somewhere in my sophomore year and the teacher was bubbling over with excitement. "We're going on a Pencil Quest!" he exlaimed.

I raise my hand. "So, you will take us to various sites. Is it like a field trip?"

"Yep," he says. "And each site will have a page that you will read. When you read the page, you'll answer questions."

"More like a moving textbook," he says, "with tons of pages. Imagine that!"

"I thought it was a quest," a student says.

"And the conflict driving the quest is?" I ask.

I nod my head, "Got it. Like a Scavenger Hunt. Do we solve riddles to find new places?"

"Not exactly. You have a map."

"No, the route is determined ahead of time."

The crazy part? We ran from site to site with exuberance. We were happy to be using our pencils, even if the pencil still wasn't all that social. We loved the notion of multiple pages. I look back now at the Pencil Quests and I'm a little embarrassed by it. Yet, those were the pioneers. Those were the ones doing something different.

And here's the thing: my students are excited about our projects and our problem-based learning. They're excited about plogs and pen pal networks. It has me wondering what they'll look back at and consider to be quaint.
50 comments:


"Mr. Johnson, we have a guest who we'd like you to meet," my principal informs me. I walk down the hallway and into the conference room.

"It's free. Just like our system," he says. I've heard of Sam and his specialized academy. Just like the bagel, it looks healthy, but it's more dangerous than it appears.

"I would like you to consider the flipping your classroom," he says.

"Pardon," my principal interjects, "I am not about to have someone flipping off our students."

"No, it's not that at all. See, we have a whole system that you can use in a pencil-based classroom.  Imagine this: each child learns discreet skills independently.  Step-by-step they move through a sequential order designed for the mastery of each math skill. It is powerful. Indeed, it pretty much replaces the role of the teacher. As we think of a modern pedagogy and differentiated instruction, you need resources to reach every child, every time," he explains.

If only I had my Buzzword Bingo card with me. I probably wouldn’t have a blackout, but definitely a five-in-a-row. Besides, what he's advocating is not even a truly flipped classroom. It's simply a stack of packets.

"Wouldn't it make sense to have students use paper and pencil to write essays and solve equations instead?  What if they did some of it independently and worked cooperatively together instead? What if they developed their own problems?" I argue.

Missing the sarcasm, the slick suit snake oil salesman answers, “That sounds great.  But aren't you tired of kids not working?  This allows each child to work at his or her level independently."

“If I didn't know how to teach I would use this product instead,” I answer.

Missing the sarcasm, he says, “Exactly.  The program is designed to fit the needs of teachers struggling to provide adequate intervention.”  Intervention?  Are we dealing with drug addicts here or with children who can't comprehend expository text?

“I just don’t see the appeal of this. It’s a series of worksheets,” I explain.

“Wrong! It’s an academy. It’s a whole system of learning. Kids get to pick their worksheets and the follow the instructions. Can you help every kid at every moment?”

“So, you can’t help each child in the moment? Is that correct?” he asks.

“There you have it,” he points to the principal. And so, with that, the con artist and his con academy have prevailed over the voice of a teacher. I get it. This con academy is a free gift. However, so was the Trojan Horse.
26 comments:

I'm a Papermate. I'm a Ticonderoga. 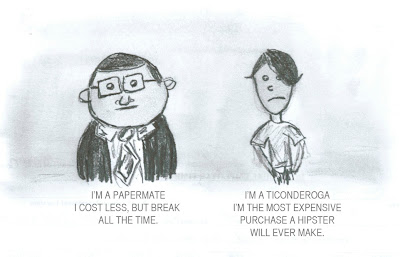 Why Were Your Kids Playing Games?

"We need to talk," the principal tells me.

"Oh." We sit down at a table and I pull out a hoarhound from his candy dish.

"I see you were playing games today instead of teaching."

"It was an advanced simulation."

"But not like Tic-Tac-Toe or Dots. This one involved a mock factory, where they were making their pictures and . . ."

"So they were drawing?"

"They were reading as well. They had to read various scenarios and describe their solutions in a text. It was real interactive and the kids were engaged and . . ."

"Do you remember what I said after the Hang Man Fiasco of 1895?"

He raises an eyebrow at me. I gulp hard and almost swallow my hoarhound.

"Yes, but this wasn't violent. How could a parent possibly complain?"

"It's about learning, Tom. I know you're trying to connect it to learning, but frankly it's a stretch," the principal tells me.

"Well, soldiers play games. Surgeons do simulations. It's part of their education."

"If you want to abandon slate-based learning, at least try the Jonestown Intervention worksheets. Or maybe fill out the packets of algorithms."

My solution: we'll create an algorithm factory and integrate it into our Conflict-Oriented Reading and Writing Project (a.k.a. The Factory Game).
31 comments:

I want to address a few of your concerns that you had about my classroom and a list seems like an organized way of doing it:

Are Pencils Making Us Narcissistic?

"It's not about comfort," Mr. Brown shoots back.

"Good point.  Let me rephrase this.  I am concerned about the pen pal networks and the plogs and the class newspaper you have created.  I recently read a study about how pencils are making society more narcissistic," he warns.

"Yes, see, people are becoming addicted to them and it's turning people self-centered," he warns.

"Addicts?  They're communicating, not drinking Coke.  Let's be honest.  Kids write short texts to one another, because they like to communicate.  It has nothing to do with a fancy yellow Ebherhard," I respond.

"Perhaps, but you can't deny that the medium is making children self-centered," he adds.

"I'm pretty sure self-centeredness is a social and psychological rather than a technological issue.  Blame humanity on that one," Mr. Brown adds.

"What about mirrors?  Those seem to make people far more self-centered than pencils.  Are we going to shatter all school mirrors?"

"That would mean bad luck," the principal says with an awkward chuckle.  He's a dry man trying his best to use humor to deflate the escalating tension.

"Look, I see your point.  Maybe we have that conversation with kids.  Maybe we ask them if they feel the pressure to perform when they have a larger audience.  And maybe that's the issue.  Maybe we keep saying 'audience' rather than 'community,' and so our words are framing our mindset," Mr. Brown adds.

Narcissists aren't always the loudest ones out there and loud people aren't always narcissists.  My father had a strong voice.  He spoke up loudly in defense of the one-room schoolhouse when the town considered closing it down and letting students walk a few more mile to go the opposite direction.  When we moved to the city, he wrote letters to the editor regarding worker's rights and factory conditions.  He wrote letters to friends throughout his informal social network, sharing stories about our family. But his voice was humble.  It was earthy.

The issue isn't the technology we use, but the tone of voice that matters.
8 comments:

7 Reasons Why I Quit Reading Your Plog

Hey readers, I quit writing for awhile, not because I don't like to write, but because I had nothing relevant to say.  I decided it would be best to take some time off rather than write a plog for the sake of a plog.
1. You quit pencil-logging and have replaced it with recommendations for information sites I should visit.  If I want a list of where to find information, I'll talk to a librarian (or anyone else well-acquainted with the Dewey Decimal System) or I'll visit a museum.
2. You sold the plog to the highest bidder.  In other words, you've replaced your voice with the voice of a corporate marketer trying to sell something. Look, I'm sure Edison makes some badass film strips, but there's more to the teaching than technology.
3. You have found one specific trick and play it on repeat.  Maybe it's one particular strategy or one specific issue and you keep going back to it on a daily or weekly basis.  Look, I know we have a niche.  That's fine.  I know I probably write about pencils too often.  My buddy John writes about his kids too often. However, I can only take so much repetition.
4. You're using it only to promote an item. Your blog becomes a showcase of what book you're writing and what you're going to say at the PIE (Pencil Integrated Education) Conference.  I'll pay for your content if it's good.  However, you need to write some original things every once in awhile.  Which leads me to . . .
5. You got stingy with content and you forgot why your readers began reading your plog in the first place.  Maybe you ran out of ideas.  Maybe you got too busy.  But you forgot that I didn't fall in love with your voice.  I fell in love with your ideas, your stories, your sharp prose and your humorous language.
6. You started getting mean toward students or staff and used your plog as a means of attacking people rather than ideas.  I've done this before with a lady named Gertrude.  She read my plog and cried.  I realized the pain that my venting had caused.
7. You forgot that plogs were supposed to be interactive.  You never commented back.  You never asked thought-provoking questions.  I read the paper.  What I hope for in a plog is a chance for a dialogue.

Note: I have only abandoned a small handful of plogs that fit this criteria.  Truth is that I'll follow you if you're honest, if you're thought-provoking and if you have something to say - which happens to be most teacher plogs I read.
10 comments: 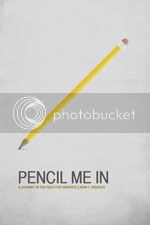 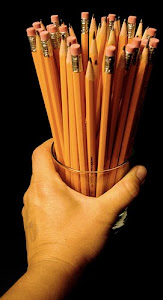 This work (in its online /blog format) is created by John Spencer and is licensed under a Creative Commons Attribution-Noncommercial 3.0 United States License. Feel free to use it, share it, mix it, mock it. Just don't use it to make money. However, I am open to publication and in those cases, parts of this blog might be used in a work using a copyright.